This Christmas, it doesn’t matter whether clients have been naughty or nice because Santa (Julie Santa, that is), along with partner Nicole Darabi, is giving Alchemy Hair Studio patrons a holiday season full of style — all from the swank Sola Salons Lake Oswego in Portland, OR. 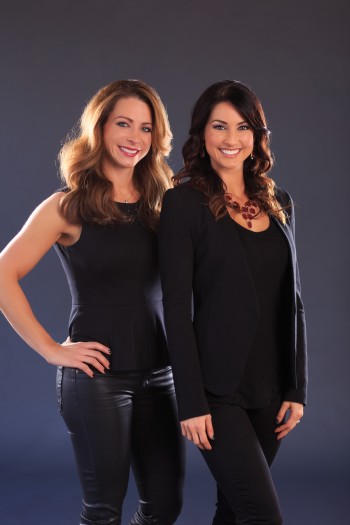 Julie and Nicole are the best of friends. When they met almost a decade ago, they knew immediately that they were going to be friends because they “come from similar backgrounds and have a similar work ethic,” Julie explains. The two, who have worked together at two different lease salons, recently joined Sola — together, of course. You see, while working in a traditional salon environment, the stylists often dreamed about opening their own boutique studio. They’d even looked at a few spaces over the years, but nothing made sense financially — until about two years back, when Julie got wind of “a new concept coming to Oregon.” “I checked out the first Sola, which was in Beaverton, and thought it was the coolest idea,” Nicole recalls. She called Julie immediately. Rumor was, another Sola would be popping up right across street from the salon where the two were working.

Right away, the duo sensed something different at Sola. The owner, Myrle McNeal, wasn’t like any other salon owner the stylists had encountered. “We love Myrle,” Julie gushes. “He’s the sweetest, and I’m not just saying that!” While the Lake Oswego franchise was under construction, Julie and Nicole had lunch with Myrle. “He actually wanted our feedback and valued the fact that we knew the area so well,” Nicole remembers of the meeting. “He really listened to us.” “We knew we would be making the move to Sola about six months before it happened,” Julie admits. “And, it was so hard to keep it a secret because we were really excited.” According to Julie, “clients responded beautifully” to Sola, and not a single one was lost in transition. “Our clients are still excited about it and love to tell their friends about the new place,” Julie says. And, while the two stylists each have their own independent clients, they scooped up one of Sola’s rare double studios — there are just three at their salon — as opposed to owning two singles. This allows the business partners and friends to work together closely. 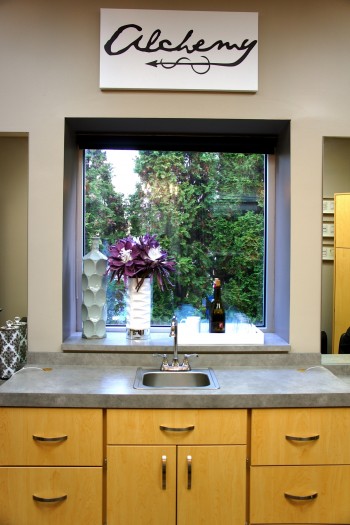 The two just celebrated their one-year anniversary with Sola last summer and are still enamored with their new(ish) space. And what a space it is! “You don’t realize in a traditional salon how much control you give up,” Julie explains. “You have zero control over the environment, who is hired to work the front desk or run your books, or what the aesthetics look like.” Nicole, who originally went to college for interior design before realizing that a career in hair was a better fit, did most of the design in the team’s shared space. “Coming from a really large lease salon, we’d gotten used to the place feeling like a big empty space,” Nicole says. “Julie let me have free rein over our décor at Sola, which I loved.” With mostly female clients, Nicole wanted something that was “feminine but not overly so.” So, she added pizzazz to neutral walls by incorporating fun, damask print chairs and a lovely chandelier. “Most of the products we sell are simple,” Nicole explains. They’re all vegan, and the packaging is white, which means when it comes to color the space brims with creams, whites, and greys. “The aesthetic of our studio is very minimalistic yet still very comfortable,” says Julie, who describes the space as “quiet, calm, soothing, and so personal.” She adds, “Nicole was fantastic about decorating.” 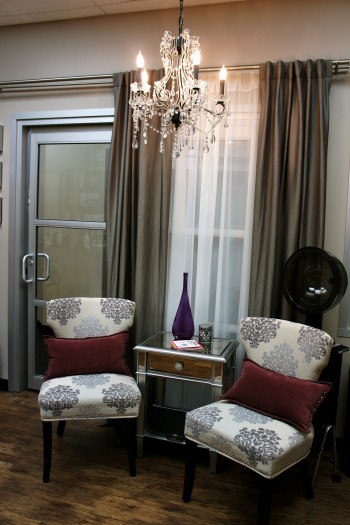 Nicole and Julie’s studio is the perfect spot for slowing down. Says Julie, “in this day and age where everything is so automated, so electronic and impersonal, it is really refreshing to have that one-on-one quality time, which is how you create long-lasting bonds with a client.” Both clients and other stylists adore the unique space — so much so that some Sola newbies even peek inside before designing their spaces. And, the really great thing is that if the team ever tires of their current digs, they can change the interior on a whim and won’t need to ask anyone but each other for permission. “I’ve been a hairdresser for 19 years, and I would have made the move to Sola a decade ago if this concept was around then,” Julie says.

Aside from being genuinely excited about Sola, the stylists are also excited about the upcoming salon holiday party — a time for all the Portland-based Sola stylists to convene, get to know one another, and celebrate. “You still feel like you are part of a big family, even though you have your own space,” says Nicole. Blowout holiday soirées are one of the many ways Sola owners like Myrle create camaraderie amongst stylists.