The stylists’ individual journeys into hair offer more insight into their unique personalities. Kim, for example, went to beauty school to make money to pay for culinary school. She liked the beauty industry so much, though, that she never left. (“I’m a fly by the seat of my pants kind of person,” Kim admits.) 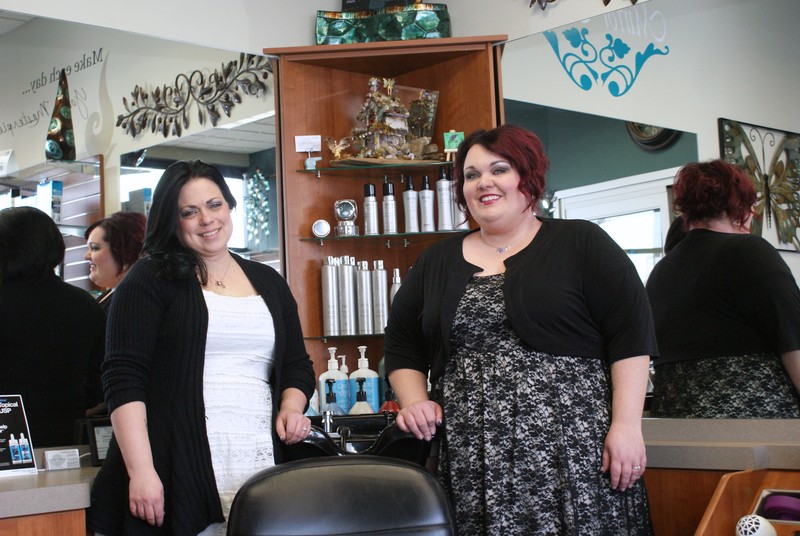 Jackie, on the other hand, always knew she was going to do hair. “My mom told me I was born with a lipstick tube and a hairbrush,” she says, laughing. “When I was really young — we’re talking 10-years-old,” Jackie continues, “I cut and foiled neighbor kids’ hair.”

“I jokingly say I’ve done hair my whole life,” Jackie says, explaining that, technically, she’s been licensed since 2000. Jackie was so confident in her professional pursuits that she starting cosmetology school during high school: “I couldn’t wait to get in the chair,” she says.

Jackie continues, “I’d always heard that one appointment with a hairdresser could change your entire life, and I thought that was really powerful.” Whether it’s a chronic illness, unruly children or a troubled marriage, Jackie and Kim love having the power to make clients feel better when they walk out of their door. And, they love having their own door for clients to walk out of, too.

Jackie and Kim met ten years ago at their previous salon, when Kim (a manager) interviewed Jackie for a job! The interview was a disaster, according to Jackie — but, it couldn’t have been that bad because Jackie ultimately got the job and the girl.

It wasn’t exactly that Jackie and Kim were unhappy at their previous salon, but Jackie says that, “Especially coming from a commission-based salon and being very requested stylists with loyal followings, I think we hit that point where we needed to move on.”

On top of that, the Zugschwerts have a 13-year-old son, and, between busy, inflexible work schedules that often spanned weekends, they were struggling to carve out ample family time.

“We always kind of wanted to own our own salon, but,” Kim fills in the details, “Because we had both managed at our previous jobs we realized we didn’t want to have employees because they’re a pain in the butt.”

Money, of course, was an issue, too. “We didn’t have the money to build a salon upfront, and we weren’t sure how to get started,” Jackie says, adding, “We were in a rut.”

In a way, it felt like Sola Salon Studios in Woodbury, MN landed in the Zugschwerts laps. 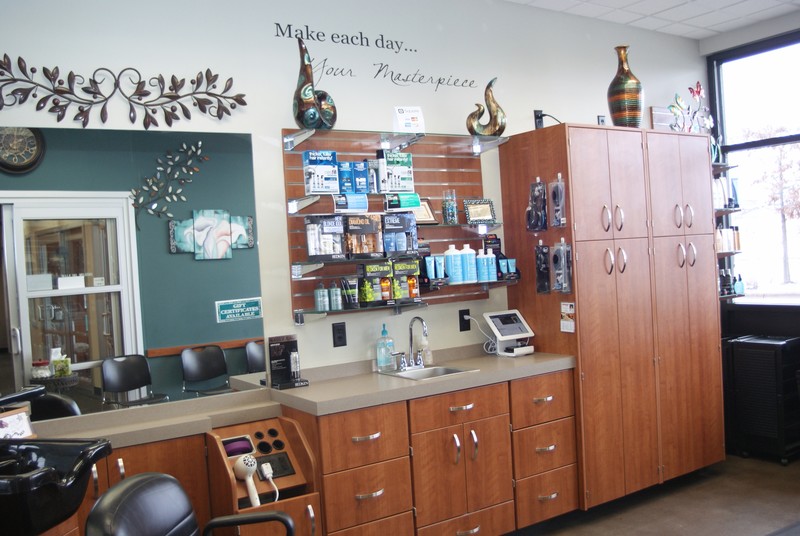 “We kept getting these Sola postcards in the mail,” Jackie says, revealing that she initially thought it was a scam. “There’s no way that’s possible, and you’re not paying out of the nose,” Jackie had thought.

After months of dismissing Sola, Jackie finally rang up Sola Woodbury proprietor Patrick Elgin. The Minnesota salon wasn’t even built yet, and Jackie reluctantly agreed to a meeting.

“Within the first fifteen minutes of meeting him, I felt like I’d trust Patrick with my life,” Jackie says. She toured the salon site on a Wednesday; by Friday, the Zugschwerts were signing papers for their new studio.

Neither Jackie nor Kim had time to be nervous: “From the time we met with Patrick and opened shop — that was a six-week period,” Kim says, noting that in the midst of their whirlwind career move the duo was also planning a wedding! It was a lovely spring wedding they were able to pay for in cash thanks to Sola, where business was booming from the get-go.

Jackie, the practical one, admits she was nervous about retaining existing clients and meeting new ones. The biggest problem Jackie and Kim have encountered, though, is that they’re so busy at Sola they often feel like they need clones. “That’s a good problem to have,” says Jackie, adding, “To this day, I’m still overwhelmed by the support of our clients.”

Kim confirms that the transition from a commission-based arrangement to salon ownership was strangely smooth. “We’re not missing a single client, and there are a lot of walk-ins at Sola,” she says, explaining that other stylists are always willing to make sure new guests get hooked up with the right stylist.

Even the administrative details were cake: “Sola takes such care to get your prepared; you almost can’t fail,” says Jackie. Both Jackie and Kim praise landlords Patrick and Erin Elgin for their constant assistance and contagious enthusiasm.

Having a good landlord helps, but it’s the salon owners who determine a business’s long-term vitality. With their differing personalities, Jackie and Kim are a dynamic duo capable of catering to all clients, complimenting one another in every way possible.

From how they hold shears to customer consults, the stylists “do the same thing, but we do it completely opposite,” Kim says.

While the Zugschwerts offer some specialty treatments like waxing, they “leave the intense, extra-super-expensive treatment to other people,” Jackie explains, ratting off eyelash treatments and massage as services she and Kim would rather outsource, reiterating, “We do hair: cuts, colors, Brazilian blowouts.”

“We’re pretty bomb-ass at color,” Kim chimes in, offering that the stylists are known for the expertise in funkier hues.

As for the salon’s name – Mirror, Mirror – that was Jackie’s brainchild. “I started thinking about Snow White, and that old rhyme; for me, it was like a fantasy,” she says. Both Jackie and Kim are experts in customer care, and, thanks to ongoing training and a gushing passion, every client gets to feel like the fairest one of all.

The salon’s subtle ambiance – currently undergoing a makeover – caters to a diverse clientele, and is family-oriented and sunny with a giant picture window. “It’s not uppity, uppity because we aren’t like that,” Jackie says. Rather, the environment is relaxed, welcoming and friendly. “But, you definitely aren’t going to fall asleep listening to spa music,” says Jackie, noting her and Kim’s affinity for classic ‘80s and ‘90s jams.

Having control over the salon’s look (and sound!) — that’s just one of the many things Jackie loves about salon ownership. “It’s the freedom and flexibility,” she says, bragging, “Who wouldn’t want to be their own boss?”

Adds Kim, “There’s more appreciation coming from our landlords than either of us ever got from salon owners in the past; there are just lots of good people here,” she says, referring to fellow owners operating under the Sola Woodbury roof.